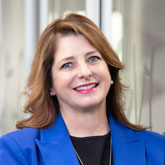 Experienced lawyer Reana Steyn was appointed as the Ombudsman for Banking Services in 2017. She obtained her B.Com and LLB degrees and completed her articles at  the well-known law firm Deneys Reitz Attorneys (now Norton Rose Fulbright) in Johannesburg. She spent 9 years in practice, specialising in matters as diverse as aviation, insurance law and medical negligence. This was followed by a further decade specialising in insurance law at one of the leading insurance companies. Her introduction to the credit and regulatory space came with the passing of the National Credit Act Regulations in 2006 when she was appointed as the first legal advisor to the National Credit Regulator. Reana honed her senior management skills in KPMG’s Compliance and Regulatory department.

Her work in the ombudsman and alternative dispute resolution sphere began with 7 years at the Credit Ombudsman of South Africa, for the last 5 of which she held the position of Deputy Ombudsman. She was then appointed as Ombudsman for Banking Services – the first woman to hold this position. She is currently Treasurer of the International Network of Financial Ombudsman Schemes (INFO Network), and Chairperson of the Ombudsman Association of South Africa.

Reana is passionate about ensuring fairness in alternative dispute resolution, working towards increased awareness of the availability of these services and furthering the education of consumers regarding their rights and responsibilities in relation to banking and credit matters.