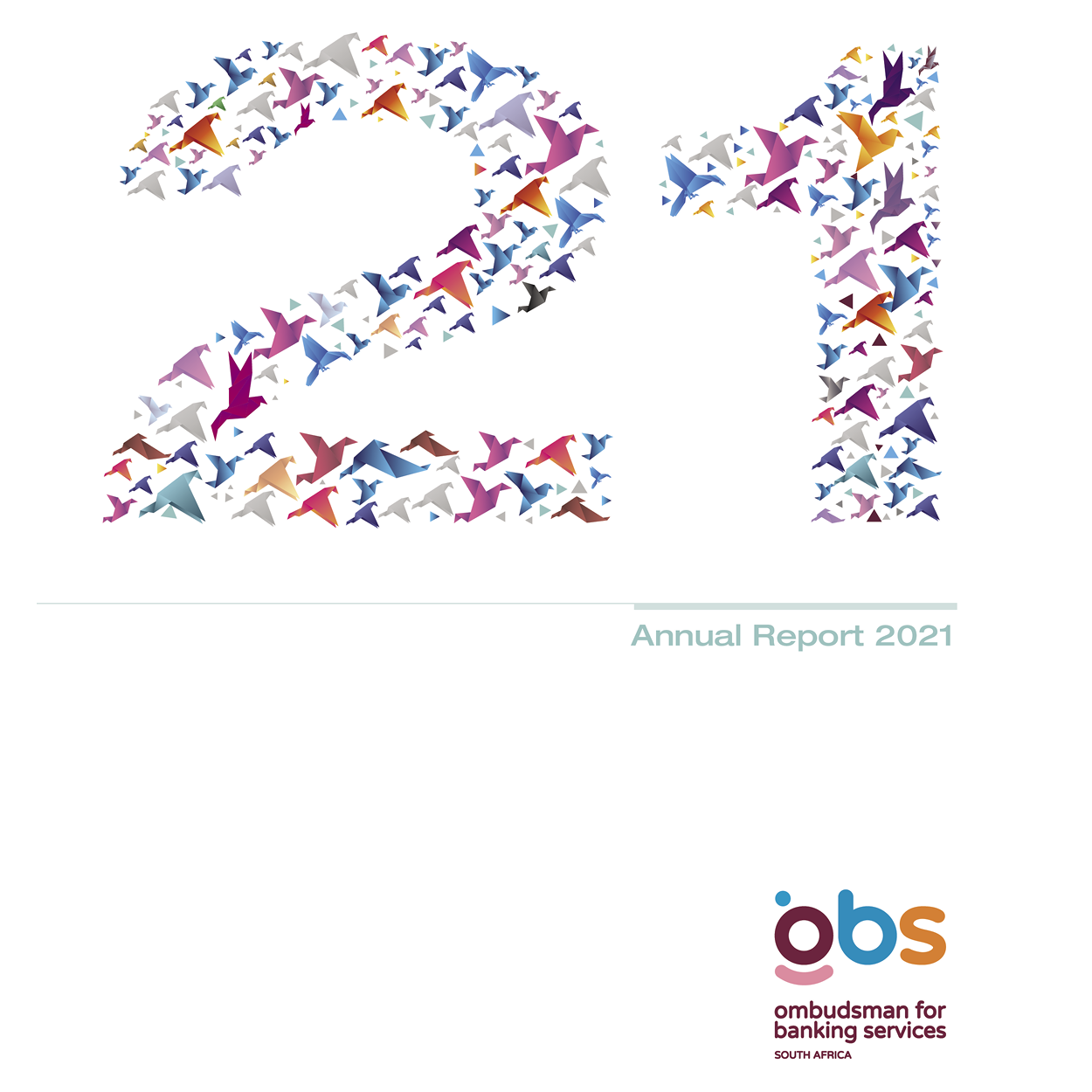 Watch the 2021 Annual Report launch below:


Over the past two years, the Covid-19 Pandemic has disrupted the traditional banking model testing it to its limit. Banks are battling to address this. Reana Steyn, the Ombudsman for Banking Services (OBS) points out that 2021 brought with it some serious financial challenges for most South African banking consumers.  These consumers had to turn to the OBS for intervention against their banks. “This is evidenced by the record number of complaints received and investigated by the OBS in 2021 where the number of complaints adjudicated by the OBS increased by 7% as compared to 2020,” says Steyn.  She added that the number of cases finalised in 2021 increased from 7 230 in 2020 to 8 039 closures. This was a 9% increase from 2020.

Steyn advised that despite this increase, the OBS was able to resolve these complaints efficiently. Further, she encouraged all consumers who have been wronged by their banks or who have suffered losses, or some serious distress and inconvenience due to a bank’s maladministration, to contact her office for the free dispute resolution service it offers.

Continuing the trend from previous years, 2021 was no different with many of the complaints received and resolved by the OBS relating to fraud, maladministration by banks, closure of bank accounts and repossessions. The OBS opened a record 8 257 complaints during the reported period. This was 7% increase from 2020 and a 28% increase from the number of cases opened in 2019.

“Over 10 330 complaints were referred to the banks in 2021 compared to the 8 389 cases in 2020. Referrals are complaints received by the OBS from consumers who have not provided their banks the opportunity to resolve the complaint with them in an amicable manner. The OBS sends these complaints to the banks, on behalf of the consumers, for the banks to attempt to resolve the matters directly with consumers. The matter is only converted into to a formal case if the problem cannot be resolved by the bank,” says Steyn.

She added that since it is her office’s vision to be known as a trusted mediator of disputes, the constant increase in referrals (23% increase), complaints (9% increase) and calls received by the OBS call centre (7% increase from 39 239 in 2020 to 41 880 in 2021) is hopefully an indication that  the public is  becoming aware of the free, fair, professional, and expedient alternative dispute resolution service offered by the OBS.

Types of complaints received in 2021

According to Steyn, many of the complaints opened and investigated by her office in 2021 involved instances where bank customers became victims of various types of fraud.

Second, the OBS dealt with many service-related complaints, maladministration by banks, consumers being debt stressed, account closures by banks and consumers disputing the fees or interest rates applicable to their agreements.

Current Account complaints accounted for 16% of total cases opened. This was a 3% decrease from 2020.

ATM related complaints continue their decline with the total number of complaints opened accounting for 7%. This is a 2% decrease from 2020 and a further 6% decrease from 2019. Steyn pointed out that in previous years, such as in 2015, ATM related complaints constituted the largest number of complaints that were received and investigated by the OBS. However, due people choosing technology to do their banking, internet banking has taken over. “This trend has obviously been heavily influenced by the Pandemic,” says Steyn.

She advised that in the majority of these complaints, the losses suffered as well as the inconveniences experienced could have been avoided had consumers been more sceptical of fraudsters posing as bank personnel. “It is important that consumers protect their confidential banking information. Further, consumers should never accept assistance from strangers at the ATM, Finally, consumers should become more involved in the management of their accounts by constantly going through their account statements and engaging with the banks for assistance at the first sign of financial distress,” says Steyn who added that this should be encouraged over avoiding banks at the first sign of trouble.

Steyn added that the list of potential problems and ways to lose money is endless. However, she advised consumers to be prudent and read up on latest fraud trends or to make inquiries at their banks about their various offerings for people in financial distress. This is to avoid legal action and properties being repossessed.

Steyn advised that in 73% of the matters resolved by her office in 2021, the findings were in favour of the banks. This means that in 5 846 (72.7%) cases, it was her office’s findings that there was no legal nor fair grounds to uphold the complaint against the bank. She added that her office’s findings will always be guided by the facts, the law, fairness as well as considerations of best banking practices (national and international).

Steyn was however pleased to have been able to assist those consumers who had legitimate and substantiable claims. She confirmed that, through her office’s intervention, the concerned banks were held 100% liable for the complainant’s claims in 15.9% (1 276) of 2021 complaints.  In 4.5% (363) of these complaints, the banks were found partially liable. This means that in 1 639 (20.4%) matters adjudicated in 2021, the OBS concluded that there was some wrongdoing on the part of the banks.

“Of the matters concluded in favour of the complainants, over R19 400 000 was awarded and offered because of the OBS’s direct intervention,” says Steyn. In 6.60% (530) of 2021 complaints, no award was made to complainant. However, the OBS was able to provide them with information on why this was the case.

2021 yet again saw a notable increase in cases for most Banks compared to the previous year. While in 2020 Absa Bank (ABSA) recorded a reduction in the number of complaints (down 36% year-on-year), 2021 was the opposite.  Only First National Bank (FNB) recorded a significant decrease in the number of cases opened in 2021.

According to Steyn, this dramatic decrease from FNB can largely be attributed to the initiatives implemented by the bank’s CEO and staff to ensure that the bank aligns itself with the Treating Customers Fairly (TCF) principles and the requirements of the Conduct of Financial Institutions (COFI) Act. They made a concerted effort, to look past the black letter of the law in respect of the merits of a complaint, and to apply considerations of fairness and reasonableness where the facts of the particular matter allowed for such considerations, she added. Specific attention was also given to vulnerability of some customers and often settlements were made based on those considerations. This approach has certainly proven to be fruitful for the bank and has resulted in the reduced numbers that our office has seen, remarked Steyn.

Steyn reminded the public to be cognisant of the fact that the number of files opened against a bank should not be regarded as an indication of that Bank’s overall performance or the way that they deal with complaints.   “Consideration must be given to the fact that Banks vary in size, client profile and product mix. With fraud, the OBS has seen over the years that the fraudsters move from bank to bank targeting a certain group of consumers through phishing emails, vishing calls, etc. All of these factors impact on the number of complaints made against any bank,” says Steyn.

Below is the detail of formal cases that were opened against the 5 Big Banks in 2021.  Individual increases should be seen in light of the overall increase in the number of complaints received by the OBS:

TymeBank, saw a major increase in the number of complaints logged in 2021 with an increase of 870,8%. However, the public must remember that these complaints came off a very low base of only 24 complaints in 2020 to 233 complaints in 2021. Discovery Bank decreased by 26,7%

Steyn points out that, while there was an increase in complaints in 2021, we need to take into account that banks are dealing with a highly disruptive and challenging environment.

“The OBS will continue to monitor the increases across all complaint categories and engage with the relevant banks to ensure that they are aware of the specific challenges that they need to address in order to improve outcomes for consumers. We are confident that despite the challenging environment, progress is being made by banks to improve the service offering that they provide to consumers,” concludes Steyn.