Consumers Beware: Some Banks Are Still Collecting On Prescribed Debts 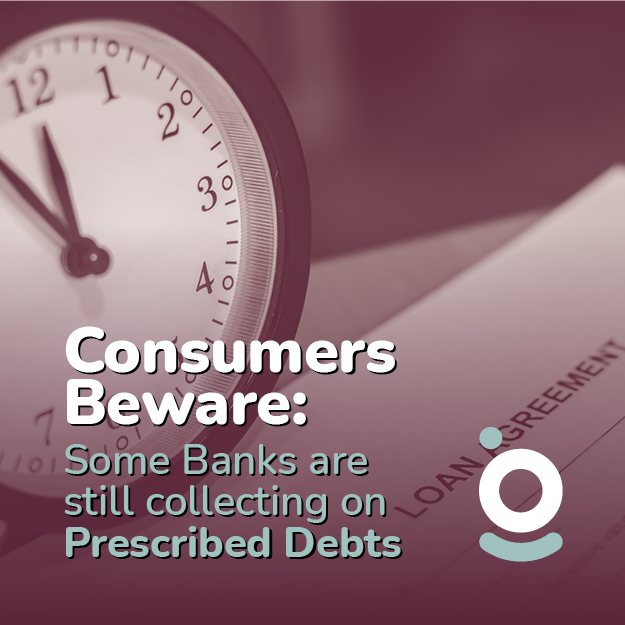 The law forbidding creditors from collecting on prescribed debts which falls under the National Credit Act 34 of 2005 (NCA) is well-known, established and adhered to – or so everyone would think.

The aim of this law is to safeguard consumers against unfair and exploitative practices by creditors and has been in effect for a number of years.

Despite the legal requirements and the guaranteed protection they offer consumers, Reana Steyn, the Ombudsman for Banking Services (OBS) warned that the OBS is still receiving, investigating and resolving complaints from bank customer’s relating to prescribed debts. In some cases, banks have been found guilty of engaging in this illegal practice.

“Unfortunately, in many instances, the protection afforded by the law is beneficial only to consumers who know about the legal principle as well as the Ombuds office. The majority of the public is left paying for debts that have prescribed and are therefore legally no longer collectable by creditors,” says Steyn.

Letter of the law

In South Africa, the Prescription Act (68 of 1969) read with Section 126B of the NCA, stipulates that a debtor’s liability to pay a specific debt to a creditor is extinguished as a result of the passing of a prescribed time period.

“The Prescription Act prescribes the time period after which a consumer’s obligations to pay a monetary debt to the creditor will be extinguished and the instances in which this period will be delayed or interrupted. The Prescription Act is clear. Generally, contractual, and civil debts will be extinguished if not paid or acknowledged as being owed to the creditor by the debtor for a period of three years from the date when the payment was due,” says Steyn.

However, there are exceptions where the prescription period for certain contractual and civil debts, is longer. “For example, a bank’s claim for the repayment of a monetary debt based on a Court Judgment, as well as claims for debts secured by mortgaged bonds, only prescribe after 30 years and not 3 years”, warns Steyn.

Is it legal or illegal for creditors to collect on a prescribed debt?

The protections afforded to consumers by the NCA are not applicable to all agreements and as such, it is still legal for creditors to demand payment or call consumers to get them to acknowledge a prescribed debt and even sue on a prescribed debt, for agreements falling outside the NCA.  “It is important for consumers to be aware of the fact that once they have acknowledged owing the debt, even if they have not made payment, they will not be able to successfully raise the defence of prescription in Court should they be sued by creditors on prescribed debts,” says Steyn.

Under the protection afforded to consumers by the NCA, the banks and other creditors are prohibited from collecting or selling a debt that has prescribed. “Therefore, debtors no longer have to be aware of this law and they do not have to raise the defence of prescription in order to be absolved from paying these debts and to have their credit bureaus profiles updated to reflect the correct state of affairs,” says Steyn.

When is prescription Interrupted?

According to the Prescription Act, the running of prescription is interrupted if, during the three years after the payment was due, the following happened:

“If you are a bank customer and none of the above happened, and you receive a letter of demand from the bank or its lawyers for payment of a debt you believe has prescribed in law, you should raise prescription. If they continue to demand payment or take any other steps to collect the debt, you should log a complaint with the OBS,” advises Steyn.  She adds that, while banks claim that they have policies and systems in place to ensure that they do not breach the law and collect on prescribed debts, the OBS still regularly receives these kinds of complaints from bank customers.

Steyn confirmed that, between January 2021 and July 2022, the OBS received and investigated a total of 193 complaints relating to allegations of collections on prescribed debts by banks. An amount in excess of R1 million was written off or repaid to complainants.

A total of 118 complaints were received in 2021. In about 33% of these cases, the banks in question were found to have been unlawfully collecting or attempting to collect on prescribed debts by the OBS. “In 2022, the OBS has to date received 75 of these matters. In 29% of these cases, banks have again been found to have transgressed the Prescription Act as well as the NCA “, says Steyn.   She added that, as recently as last week, an amount of R216 197 (the outstanding balance) was written off in one case and the complainant was also refunded the R3 200 which he paid towards the prescribed debt.

Mr X obtained a personal loan with his bank for the amount of R74 687. The funds were paid into his account on 8 December 2016. Sporadic payments were received by the bank until 04 January 2019 when the last payment was received.

In March 2022, Mr X lodged a complaint with the OBS alleging that the account in question had prescribed as he had not made payments for more than three years. He also did not acknowledge the debt nor received a summons from the bank.

In a response dated May 2022, it was the bank’s submission that the debt had not been prescribed as the payment made on 4 January 2019 interrupted the prescription. Further, the bank advised that, in a call made to Mr X by its collection attorneys, Mr X acknowledged the debt.  The bank also advised that a summons had since been issued and served on Mr X on 4 February 2022.

Based on these seemingly reasonable reasons, the bank maintained that the personal loan debt had not prescribed.

Upon investigation, the OBS found that the outstanding balance was over R112 495. The OBS studied the loan account statements, the summons, and listened to the call recording. The OBS found that the debt in question had legally been prescribed since the last payment received on 4 January 2019, no other payments were received towards this account. The summons which was served on Mr X on 4 February 2022 also fell outside the three-year prescription period. Lastly, upon listening to the call recording, it was clear to the OBS that Mr X had not acknowledged the debt.

It was the OBS’s recommendation to the bank to write off the entire debt and the bank agreed. Mr X was issued with a paid-up letter and his credit bureaus profile accordingly updated to reflect the true status of the account.

In 2013 Mrs J obtained a Revolving Credit account from a major South African Bank to the value of R110 000. Payments were received by the bank until Mrs J became unemployed in 2014 and could no longer make payments. Mrs J advised that for seven years, she had been receiving communication from the bank’s lawyers requesting her to pay the debt.

Mrs J complained to the OBS that the bank had, for all these years, kept the account open and that the outstanding balance had increased to over R500 000. It was her submission that the bank was guilty of reckless lending and requested the OBS’s to assist her.

In response to Mrs J’s allegations to the OBS, the bank advised that the RCP account was issued to the complainant subject to the affordability requirements as set out in the NCA. It was therefore the bank’s submission that, at the time that the credit was given to Mrs J, she could afford to make the required contractual repayments. Regarding the outstanding balance, and out of its own accord, the bank noticed that there was an issue. An account reconciliation was conducted by the bank which resulted in the amount of R318 664 being written off by the bank. This reduced the outstanding balance from R542 067 to R223 403 The bank considered this fair given Mrs J’s circumstances.

However, upon investigation by the OBS, it was noted that Mrs J had in fact made her last payment on 30 June 2014. The OBS’s investigation further concluded that, between 30 June 2014 and 29 May 2017 Mrs J had never acknowledged owing the debt to the bank nor did she receive a summons which would have interrupted prescription. It was the OBS’s conclusion that the R223 403 debt that was demanded by the bank had prescribed. The OBS successfully recommended for the bank to write off the debt and update Mrs J’s credit bureaus profile.

In May 2016, Mr D opened a credit card account with a South African bank. Mr D received a credit limit of R25 000. He transacted with the card and the transactions amounted to R26 305. Sporadic payments were received by the bank. Due to defaults, the bank handed over the account to its attorneys for collection. In November 2016, Mr D signed a Section 58 Consent to Judgment. The last payment on the account was received by the bank in August 2017.

Upon the OBS’s investigation, it was argued with the bank that, the Consent to Judgment that was signed by Mr D in November 2016 – together with the payment that was received in August 2017 – constituted an acknowledgment by Mr D. Since Mr D had not made payments nor verbally in writing acknowledged the debt, it was the OBS’s findings that the debt had prescribed in August 2020. A recommendation was made that the bank apply to rescind the Court judgment that was obtained in March 2021 as well as refund all the payments Mr D made after August 2020. The bank agreed. Over R26 000 was written off, and the bank refunded a further R3 000 to Mr D.

Steyn encourages all South Africans to take the time to read up on, or be informed of, the laws governing the agreements they enter into with creditors. “It is imperative that consumers know and understand their rights. They should also be aware of the free professional assistance offered by different organisations such as the OBS,” says Steyn.

In conclusion, Steyn raised a very important issue. That the information presented in this release is not aimed at encouraging people from reneging on their debts. Steyn reminds consumers that, in the majority of the cases, the OBS found in favour of the banks. The debts in matters where the OBS found in favour of the bank had not prescribed and the outstanding balances had drastically increased from the original debt or balance due to the arrears as well as the additional legal fees in cases where legal action were instituted by banks to recover the amounts legitimately owed to them.